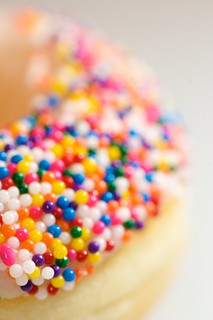 (Trigger Warning: this post could be triggering to those who have had experience with eating disorders.)

Every Wednesday morning, come hell or high water, there are treats beckoning to me at the office, looking all soft and sweet and eatable. In my department, we take turns bringing treats every Wednesday. Ninety-five percent of the time, it’s donuts. Each person has their favorite international chain, grocery store, local shop, or convenience store that they bring donuts from. And most people generously bring enough for each person in the department to have not just one, but two donuts.

I usually eat zero donuts. Sometimes I’ll take half a donut. I did that on my first week working here (almost six years ago!) and one coworker took a look at the box and said “who’s the wuss who took half a donut?”

I love donuts—don’t get me wrong. But I believe they’re unhealthy because of the sugar and refined flour content, and that they shouldn’t be a regular part of my diet. I still eat them, but mainly on special occasions. Besides—there are so many other delicious sweet treats in the world! Scones, cookies, pies, pastries! I’d rather save my sugar allotment for something more interesting than have the same treat week after week.

Still, I mean, they’re donuts. They are tempting. So I have a weapon that I use to fight the temptation.

Keep an anti-donut at your desk at work, or take one with you on treat days (if yours are scheduled like mine are). An anti-donut is something that’s a treat for you, but is still healthy—or at least better than a donut. It works best if you only eat it on days when you would otherwise reach for the donuts, or whatever treat it is that you want to avoid. If you eat your anti-donut whenever you feel like it, then it won’t have as much power to counteract donuts.

My anti-donut has been apple pie Larabars

for a while now because they’re tasty but have no added sugar or heavily-processed ingredients.

It has occurred to me only recently that another good way to avoid the Wednesday morning donuts is to eat a nice big breakfast so I won’t be hungry when I’m confronted with treats. I need to be better about this all the time (I just don’t feel that hungry first thing in the morning), but especially on Wednesdays.

All Donuts are Not Created Equal

Another strategy for cutting back on your sugar intake is to research the different types of donut and go to the treat box with a game plan. A single butternut donut from Dunkin’ Donuts, for example, is 410 calories and 33 grams of sugar, while their French Kruller is 260 calories and 10 grams of sugar. A simple rule of thumb is: raised is less bad than cake, when it comes to donuts.

If you just can’t resist the donut, maybe you have the willpower to have just half a donut. I do this sometimes, but I’m what Gretchen Rubin calls a “moderator”: I have the ability to allow myself a little bit of something without getting into trouble. On the other hand, some people are “abstainers” who find it easier to write their vices off once and for all instead of making daily decisions about whether or not to indulge. If that sounds like you, better to avoid the donuts altogether.

I’ve been using the anti-donut concept to drink less beer lately, too. For a long time, I was in the habit of popping open a beer every day when I got home from work. So when I decided to cut that down to two days per week, it helped to have an anti-beer to reach for on the abstaining days. I found that sparkling water is bubbly and refreshing and feels like a little bit of a treat, and it has virtually nothing in the way of unhealthy ingredients.

Do you use an anti-donut? Do you use this strategy to avoid some other temptation?

I’m finding that i only really remember the books i write reactions to, while everything else i read fades pretty quickly from my memory. Thus, my triumphant return to book reviews. I hope you enjoy.

I recently read a couple of books about—well, fat. And they were both good, to different degrees and for different reasons. The first was Why We Get Fat: And What To Do About It by Gary Taubes, and the second was French Women Don’t Get Fat by Mireille Guiliano. While the former was well-researched, well-argued and smart, i thought the latter was anecdotal, nonscientific and a little bit boastful, but still for the most part worth reading. And, in fact, i felt i was able to glean the best advice from Guiliano’s book having read Taubes first and knowing where the text was probably flat-out incorrect.

I really think everyone ought to read Why We Get Fat. Everyone in America, especially, including the dietitians, personal trainers and doctors out there (hear me, family? :)). If you disagree with Taubes, that’s perfectly fine. But you might want to do some research of your own to decide whether you disagree because you’ve been told otherwise, or because you can find evidence that contradicts the stuff he’s found.

Basically, Taubes argues that what we all know about weight management—that you must balance calories in/calories out, that saturated fat causes heart disease, etc.—is almost certainly wrong. I first heard about Taubes when i read his article for the New York Times entitled Is Sugar Toxic?, and i realized that he wasn’t just restating the obvious nutritional advice that we’ve all heard a thousand times, but was actually doing real research on the subject. So i sat up and paid attention, and i wasn’t too happy to learn what i did from his book. Meat is one of the best foods for us. Carbs, especially highly-processed ones like sugar and white flour, are almost certainly the worst. And while the book is very focused and sticks nearly exclusively to explaining the question raised by its title, it is quickly mentioned toward the end of the book (with no less convincing evidence) that carbs are probably also what cause many cancers, heart disease and diabetes. So even though i’m not a fat person, i feel like i should cut that crap out of my diet as much as possible for the rest of my life.

Have i started to do so? Absolutely not. Nathan and i have probably consumed more doughnuts since i read that book than ever before in our lives. But we’re thinking really hard about it.

French Women Don’t Get Fat was a different animal entirely. Guiliano cites nary a source nor study in her text, though she does refer to a whopping three individuals for whom her method has made a little bit of difference, in addition to her own fat-to-skinny tale. The basics of her philosophy are: enjoy what you eat as much as possible but eat moderate portions, especially of treats like bread (carbs), chocolate (carbs), desserts (carbs), fruit juices (carbs) and alcohol (carbs); walk a lot; and drink a lot of water.

Interestingly, there’s a lot of overlap between her approach to staying in shape and Taubes’s, despite the fact that Guiliano dismisses the low-carb approach to food as “ridiculous” and thinks that to practice that way of eating is to “risk heart disease” (not true). Everything that she says to eat in especially small amounts is a high-carb food (with the exception of meat). She and Taubes both advocate drinking a lot of water and eating plenty of greens. Both authors recommend eating plenty of soup as well, and limiting the intake of alcohol (especially beer, *sniff*) to a very low amount. Both advocate eating large meals and disdain snacking, and neither of them sees the point of intensive exercise as a method for weight loss when the result of it is almost always an increased appetite and calorie intake.

But from reading Why We Get Fat i can tell Guiliano that walking twenty minutes each day is not going to help anyone lose weight, either. It’s certainly not a bad idea and nothing ill is going to result from it, but it’s the diet that’s going to reduce a person’s waistline, not the evening stroll. She claims that those few extra burned calories “really add up,” but as Taubes points out, that can’t possibly be true unless everyone whose weight doesn’t fluctuate at all is consuming a very perfect number of calories every single day. Consider that if a person ate just twenty extra calories each day, it would take only a couple of decades for those calories to add up to an extra fifty pounds if the calorie balance imperative is true. Conversely, if a person were undereating by just twenty calories each day, she would steadily waste away over the years.

The body handles different types of calories in different ways. I’m not going to attempt to re-hash the science in Taubes’s book, because i didn’t take notes and i’d probably get it slightly wrong. But it made perfect sense to me. You should read the book, especially if you think what i’m saying is a bunch of bull.

And i think there’s a lot of truth, too, to the French idea that while Americans enjoy gorging on huge portions of food, we might actually enjoy it more if we stopped thinking of it as “sinful” and took the time to really think about and taste what we’re eating. I also thought Guiliano’s advice to cook a lot, avoid processed foods and try to eat a lot of local, seasonal produce was sage advice that would do a lot for our country. If only it were as cheap and easy to shop a farmer’s market as it is to hit up Subway, eh?